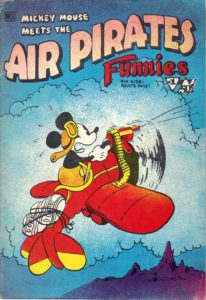 In this episode, Rob, Don and Jack Ward discuss the relationships between the law and entertainment media. These three gumshoes leave no stone unturned as they delve into the seedy and often antagonistic relationship between those who make the rules and those who make the fun. Along the way, they discuss how copyright law has affected Audio Drama, real-life superheroes, and a surprising amount of adult material. All this, and why the king of Prussia was one sneaky S.O.B., is waiting for you in this episode of The Department of Nerdly Affairs.

Lone Ranger Unmasked
http://mentalfloss.com/article/12536/court-ordered-unmasking-lone-ranger
But Moore’s career hit a speed bump in 1978, when Jack Wrather, who still owned the rights to the character, obtained a court order barring him from appearing in public as the Lone Ranger. The suit came because Universal Pictures felt it was time for a new take on the legendary masked man.
After a year-long court battle, Moore lost the right to wear the mask in 1979, a move that devastated both him and his fans. Moore was quoted as saying, “It felt like a slap in the face.”

Gary McKinnon
https://en.wikipedia.org/wiki/Gary_McKinnon
McKinnon stated that he was able to get into the military’s networks simply by using a Perl script that searched for blank passwords; in other words his report suggests that there were computers on these networks with the default passwords active.
He said he investigated a NASA photographic expert’s claim that at the Johnson Space Center’s Building 8, images were regularly cleaned of evidence of UFO craft, and confirmed this, comparing the raw originals with the “processed” images. He stated to have viewed a detailed image of “something not man-made” and “cigar shaped” floating above the northern hemisphere, and assuming his viewing would be undisrupted owing to the hour, he did not think of capturing the image because he was “bedazzled”, and therefore did not think of securing it with the screen capture function in the software at the point when his connection was interrupted.

Real Life Superheroes
https://listverse.com/2013/03/24/10-outrageous-real-life-superheroes/
Knight Warrior- Supernatural Power- to make the world a better place
Although he doesn’t have any combat training, gadgets, weapons, or identifiable means of protection, he does have a flashy costume, and sometimes that’s exactly what you need to get people’s attention. According to him, “When people see me coming up it does tend to stun them into silence.” Knight Warrior lives with his mother.

His main “heroic” activity is a full-fledged crime—he patrols Perth with an angle grinder and cuts wheel clamps off cars that have been illegally parked.Dressed in a skintight green leotard, rainbow socks, and a glue-on mustache, Wheel Clamp Man has only been working in the area for a relatively short time, but motorists are grateful for his help in helping them avoid a $135 fine.

New York, Inspiring video taking out a drug dealer out of the park
https://vimeo.com/3529737

With gardening gloves flexed and ampersat blazing, Captain Australia is waging a one-man war against crime in Fortitude Valley. In his day life he’s a stay-at-home father of two, but a desire to clean up Queensland’s streets has motivated him to put together a makeshift costume and patrol some of the “seedier areas” of Brisbane at night.

Vancouver! Wearing a black trench coat, black hat, and a green skull mask, Thanatos takes a community involvement approach to vigilante justice, passing out food and clothing to people on the street, even though he still keeps an eye out for any crimes that cross his path.

Has only been involved in one incident so far, but it was definitely bizarre. A gang armed with chains and knives attacked two detectives in South Shields in 2007. The detectives were unarmed, but out of nowhere a man leaped into the fight, swinging a katana and shouting, “Leave him alone, he’s a police officer!” The sword caught one of the gang members on the arm, and the rest of them turned and ran, according to the report.After the detectives were safe, The Flashing Blade disappeared and was never seen again. The only description the police got was that he was white, in his 40s, and had a mustache. So, be on the lookout.

Chinese Redbud Woman.
http://www.chinahush.com/2011/12/31/female-superhero-chinese-redbud-woman-appears-in-beijing/
She has been spotted several times in Beijing wearing a mask and cape and handing out food to homeless people on the streets.Are these people vigilantes, putting their lives and the lives of others in danger, or are they actually making a difference in whatever way they can?

Paramount and Axanar
https://www.engadget.com/2017/01/21/cbs-and-paramount-settle-lawsuit-with-star-trek-fan-film/
Official fan guidelines. Specifically, the production can only be 30 minutes long in total, and even then it has to be split into two parts. The Axanar film also can’t have “Star Trek” in the title, cannot use public crowd-funding and may not compensate any of the professional talent for their work.

Flagpole sitting
https://en.wikipedia.org/wiki/Pole_sitting
Flagpole sitting was a fad in the mid-to-late 1920s. The fad was begun by stunt actor and former sailor[2] Alvin “Shipwreck” Kelly, who sat on a flagpole, either on a dare by a friend[3] or as a publicity stunt.[2] Shipwreck’s initial 1924 sit lasted 13 hours and 13 minutes. It soon became a fad with other contestants setting records of 12, 17 and 21 days. In 1929, Shipwreck decided to reclaim the title. He sat on a flagpole for 49 days in Atlantic City, New Jersey, setting a new record.[4] The following year, 1930, his record was broken by Bill Penfield in Strawberry Point, Iowa who sat on a flagpole for 51 days and 20 hours, until a thunderstorm forced him down. Flagpole sitting in the 1920s was a major part of the decade. For the most part, pole sitting died out after 1929, with the onset of the Depression.

They’d keep going, but the new fucked-up New Zealand copyright law will shut down their whole operation if the company complains.

Broken Sea Audio Productions, headquartered in New Zealand, has shut down all their Robert E. Howard projects after receiving another threatening letter from the lawyers for Conan Properties International LLC (aka Paradox Entertainment).