The Department of Nerdly Affairs
DNA Podcast 041 - Remakes, Sequels and Reboots. Oh My! 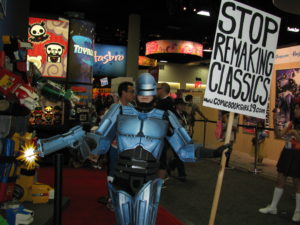 In this episode, Don and Rob sit down to discuss the issues involved with remakes, prequels, sequels and reboots, and why at best they’re a tough act to pull off well, and at worst they’re totally awful. Along the way, they delve into the nature of story itself and how stories reflect the writers and society. All that, and why the Ice Cream Man was an important figure in Star Wars lore (at least according to Don), is waiting for you in this episode of the Department of Nerdly Affairs.

Romance Novel Formula
The Anatomy of Story
Humans are wired to learn through story.
Friday the 13th
SCREAM
Why The Force Awakens Bombed in China
Murder Mystery Formula
Audiences Like Films Better when they know what happens
The Green Hornet: movie and character
The Phantom Edit
Star Wars Ice Cream Man (Willrow Hood)